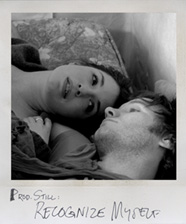 Recognize Myself is a framed portrait of a relationship that falls between youth and full adulthood. Within this context we encounter the basic elements that make up and contribute to any relationship: Sadness, happiness, dreams, memories and shared moments, experiences, songs.

The main character is trapped inside a metaphorical box – his bedsit – both by his own self-destructive behaviour and by his fear of dealing with other people or the outside world. From this position of isolation, he looks back at his relationship as if looking through a box of memories containing Polaroids, slide film and post cards. Leafing through the remnants, he tries to recapture the moments themselves, but manages only to remember ethereal fragrances and ideas, speech and sentences expressing merely anger and hopelessness, a look of sadness, or a particular song, losing himself in these as they combine with half-remembered dreams and delusions.

In Recognize Myself, I used different film stock to create textural contrasts that give clues to an audience as to where they should draw the boundaries between past and present; where these delusions and reality meet; and to depict the jarring feeling of disillusionment. I am a strong believer in the advantages of film, and I feel these contrasts are an example of what might be lost when using digital.

I like to maintain as much control over my projects as possible, keeping a strong flavour of independence in everything I do. This is the principal reason why my projects so far have been self-funded. In keeping with the independent tradition, I additionally collaborate widely with creatives in other fields, particularly art, design and music. The emotionally charged soundtrack to the film is taken from a varied and exciting assortment of bands on independent labels, and only serves to heighten our perception of the battle between joy and despair in a relationship.

The film, and particularly the subtitling, plays with the idea of the written word set against the spoken, showing the endless interplay of language and meaning in conversation and on paper – the continuous voiceover that surrounds the dreams and memories could be either narration in the conventional sense or the main character trying to formulate or structure his thoughts into a letter.

We are also faced with the problem of having to justify the choices we make that determine our immediate lives, especially within the confines of a relationship – how far can you take negativity before you realise the situation is hopeless? Do we say everything that we should? Do we suppress thoughts and feelings in order to protect someone else, only to end up hurting them? Do we shut people out when we should really embrace their sympathy and concern? Maybe the relationship itself is the box that traps those inside it? Do these choices that we make determine who we are?

Through this, the film questions perception and self-identity, and asks the audience a simple but all too troubling question – do you recognize yourself?