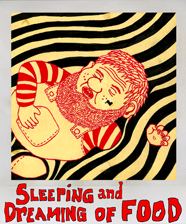 INTRODUCTION
Comic book writer/artist Kolbeinn Karlsson once introduced his latest comic Sleeping and Dreaming of Food by saying that it's about sleeping and dreaming of food.
We quite like that simple introduction to a story this rich and imaginative.

In fact, we liked the comic so much that we decided to make a short film out of it.

Watch the trailer on Happy Endings TV on youtube.

Then Uppsala Short Film Festival liked the film so much, they decided to award us with an honorary mention with the motivation:

"For an inventive and atmospheric piece of animation that skillfully and confidently straddles the divide between two art forms."

The film then landed Eva-Marie a nomination to the prestigious 1 km Film scholarship at Stockholm Film Festival.

The the swedish regional film funds, Film i Dalarna and Film i Uppland, got so excited about us, that they financed a follow-up production, which is Day of the Hominid (Den Svarta Sjön).

Since then, the film has had recognition abroad in countries such as England, Taiwan, Germany and the States.